Nitro Member
"When this race first started, didn't they have rules that Ford & Mercury cars had to be Ford powered, Chevy / Pontiac with Chevy engines, Dodge & Plymouth with Chrysler engines? And then later an "outlaw" class for Fords, GM, AMC, etc with Chrysler engines. I never remember any AMC F/C (Javelin, AMX) that ran AMC engines, with the exception of Hayden Profit, who had a real AMC engine in his car on nitro."—Cliff

Cliff, you'd think that was the case since it was so early in the FC movement. But no, many cars at the first 2 Mfrs. Meets featured non-matching motors. To review:

1967
CHEVY: Chapman "Outa' Site" Camaro---Hemi
PONTIAC: Brutus Firebird and GTO, New Breed---Hemi's; Drag Strip Magazine says Don Sappington raced his new Firebird. I assume this was his '68 season Phoenix Bird but I've never seen a photo of it at the '67 Mfrs. Meet. Since his previous '67 FC was the Candid Camaro it's possible the Phoenix Bird was Chevy powered. Ironically, the Gay Bros. Firebird performed the best and placed r/u to Schartman in the grand final---ironic because Roy Gay drove the only Pontiac powered FC!
FORD: Dick Loehr Mustang---Hemi

There was only one year for these "hybrids," the '69 Mfrs. Meet Wacky Racers team. From '70 onward the concern for matching motors was tossed out. There were just too many Hemi powered non-Mopar FCs!
J

Nitro Member
Thanks, Allan! It's always a pleasure to look back at the '68 Mfrs. Meet.
But as I reviewed published records of the '67 event I was reminded about a major difference between these first two years w/ regards to the alternate FCs. The '67 race had no team-designated cars. That is, a Chevy FC wasn't reserved for the Chevy team if called upon. Alternates raced for any team w/ no concern for their body style. Here are some examples. After Chrisman blew off his roof his Mercury team replacement was...Jungle Jim's Nova! The Pisano Bros. Camaro also subbed for missing Mercury and Ford team members. Those are just two examples but there were several more.
C

Nitro Member
If you count all the Pro F/C in the entire world, how many would you think exist? I know there are a few (3??) in Europe (Robin, am I right with that count?) and maybe a few in Australia. The rest USA. However, there are starting to be a lot of nostalgia F/C in both Europe & Australia. One of the Aussie cars just ran 5.42 & 266 (see report below). Matt Abel in the old Jack Harris Nitro Thunder. 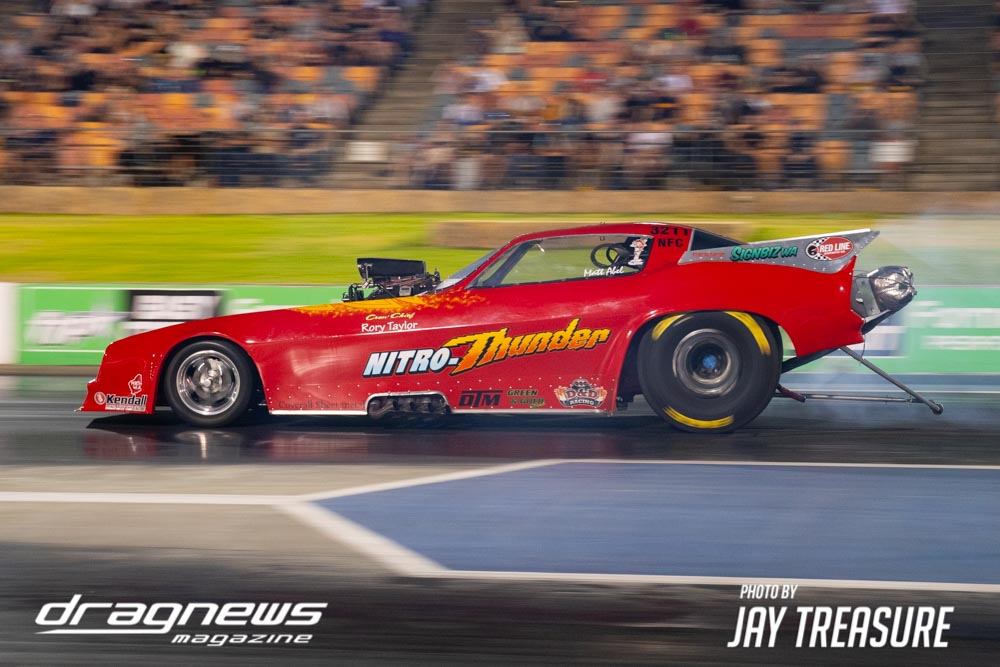 The biggest nitro event in Australia since March took place at Perth Motorplex on January 2 as the Nitro Slam combined the BME WA Nitro Championship, Nitro Bikes and the Summer Slam.

dragnews.com.au
You must log in or register to reply here.
Ways To Support Nitromater

Drag Racing Incidents From The 80's-90's